As a European Commission report and an important academic paper have recently reminded us, air pollution remains a persistent threat to population health across Europe. Pollutants such as particulate matter and ozone are among the leading causes of premature mortality and respiratory-related health outcomes. Globally, exposure to air pollution ranks as one of the top ten risk factors for health.

At the same time there is a large body of North American research suggesting that more socially disadvantaged places tend to have higher levels of air pollution. If this is true in Europe then it may help to explain why health continues to be so geographically unequal. In Europe, few studies have examined the social distribution of pollution, and what work there is has tended to focus on specific locales such as cities.

Through Equity Action – a Joint Action between the EU and Member States – a group of researchers at CRESH were commissioned to develop a tool for examining geographical and socioeconomic inequalities in particulate and ozone air pollution across regions of the European Union. We obtained EU-wide data on socioeconomic status1, particulate matter (PM10)2, and ozone (O3)3 for regions4 across the EU in 2006 and 2010. We divided the EU regions into five equal groups according to the measure of socioeconomic status, and calculated summary pollution statistics for each cluster. 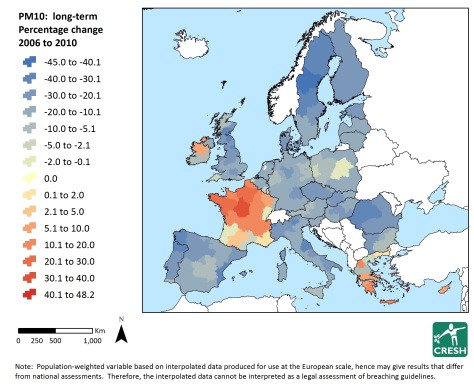 We also found that mean PM10 and O3 levels were consistently around 30% higher in the most socioeconomically disadvantaged compared to the least disadvantaged areas although this trend was non-linear across the groups of regions (see graph).

Whilst it is encouraging that overall levels of air pollution across the EU have reduced, our findings reveal that these advances have not been shared equally across all regions. Socioeconomic inequalities in pollution are a public health concern as they may contribute to the well-known gradient in health across social groups. The European Commission recognises the importance of reducing health inequalities in the EU. Part of the strategy is to assess the impact of EU policies on health inequalities. Yet addressing health equity concerns did not feature in the EU’s recent Clean Air Policy Package. The findings from our project suggest strategies to address health inequalities across Europe are likely to require intersectoral collaboration to incorporate environmental concerns such as air pollution.