*****ALCOHOL OUTLET DATA UPDATED 25 JUNE 2015:  Previous to this date the alcohol outlet density data had used an alternate measure of density than outlets per km2, resulting in values that were typically 30-40% lower than the actual value.  Whilst the figures have changed the general picture has not: an area of high density remains an area of high density.  The rest of the data are unaffected.*****

In Scotland, smoking and alcohol are two of the most important preventable causes of ill-health and premature death: one in every five deaths is attributable to tobacco and one in 20 to alcohol.  The neighbourhood availability of tobacco and alcohol products has been implicated in promoting smoking and drinking behaviours.  In CRESH we’ve been investigating the links between tobacco and alcohol environments and health (see here and here for more details).  In partnership with Alcohol Focus Scotland (AFS) and Action on Smoking and Health Scotland (ASH Scotland) we’ve been funded by the Economic and Social Research Council (ESRC) to publicise our research and make it more accessible to the public and policy makers.  This has enabled us to create a webmap and data download facility, as well as some eye-catching infographics for smoking and alcohol.

In Scotland there are five licensing objectives to be considered when granting a licence to sell alcohol; the fifth objective is to protect and improve public health.  Licensing boards are also required to assess overprovision of licensed premises in the board’s area.  Until now this information has not been readily available to local residents.  Our aim is to make the data publicly available allowing users to question notions of overprovision.

The website is free to use and the data are also free.  You can explore the data as you wish, however as this is a funded project we ask you for some details before you download the data.  This information will allow us to track data use and make improvements to the website in the future.

On this page we describe the information that can be displayed and downloaded through the webmap site.  For more information about the project please contact the project leader Dr Niamh Shortt at niamh.shortt@ed.ac.uk.

The area boundaries that can be shown on the map can all be downloaded from other sources, for use in mapping software such as ESRI’s ArcGIS.

The neighbourhood outlet, deaths and deprivation data that can be mapped all refer to small areas called ‘datazones’.  Datazones are the main administrative geography used in Scotland, and are used for the dissemination of many types of official statistics (see www.sns.gov.uk).  There are 6505 datazones in Scotland, with populations typically between 500 and 1000.  We use data zone boundaries to represent local neighbourhoods.  Datazone boundaries are available from www.sns.gov.uk.

Boundaries for Local Authorities (32 in Scotland) and Scottish Parliamentary Constituencies (73 in Scotland) can also be displayed on the map.  These boundaries can be downloaded as part of Ordnance Survey’s Boundary-Line product.

The data for each neighbourhood

We collated alcohol and tobacco outlet location data as part of an earlier project funded by the Scottish Collaboration for Public Health Research and Policy (SCPHRP).  (Find out more about this work here).  We obtained the locations of all outlets in Scotland licensed to sell alcohol for consumption on the premises (on-sales) and off the premises (off-sales) from each local licensing board in 2012.  We also obtained the locations of all premises registered on the Scottish Tobacco Retailers Register on 30 September 2012.  The datasets were checked for errors (e.g., duplications), resulting in verified locations for 10,161 tobacco outlets, 11,359 on-sales alcohol outlets and 4,800 off-sales outlets.

We counted the number of each outlet type within 800 m of the population centre of each datazone (800 m represents a 10-minute walk at average pace), and converted this to a density value per km2.  This 800 m zone was assumed to represent the typical neighbourhood experienced by the population of a datazone, and was unaffected by artificially-imposed datazone boundaries or differing datazone sizes.  The example below shows that a circle with a radius of 800 m around this datazone’s population centre (red star) contains 73 on-sales alcohol outlets, and that this includes a number within neighbouring datazones.

Example: the number of on-sales alcohol outlets within 800 m of the population centre of one datazone. 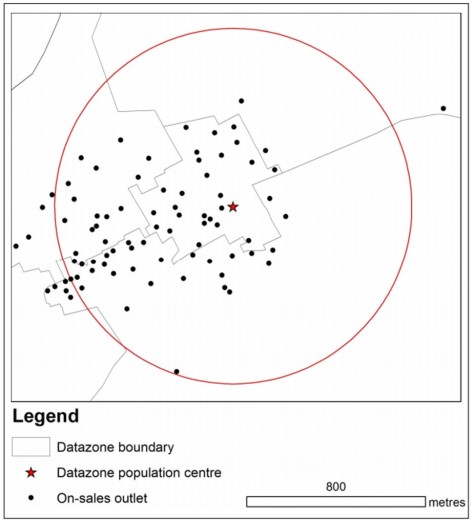 We have used deaths data to give an indication of the ill-health due to alcohol or tobacco in each neighbourhood.  We extracted deaths from lung cancer and lung disease, and those due to alcohol-related causes (defined by NHS Scotland here) for a 10 year period (2002 to 2011) from General Register Office for Scotland (GROS) data.  We selected lung cancer and lung disease to provide a measure of tobacco-related illness because the large majority of these deaths are due to smoking.  However, we acknowledge that a portion of these deaths may not have been related to smoking, and that a number of other causes of death (e.g., heart disease, other cancers, or diseases of the digestive system) are partly attributable to smoking.  As a result our indicator will represent a substantial under-estimate of the smoking-related death rate.  Detailed information about smoking-related illness is available from NHS Scotland here.

Numbers of deaths should not be compared between datazones because datazones have different population sizes, and the split between males and females, or younger and older people, will vary.  Rates are often used for comparing areas, as these express deaths per 100,000 people.  But as datazone populations are quite small, cause-specific death rates can be unreliable.  We therefore used a more reliable method to ensure comparability: we calculated a Standardised Mortality Ratio (SMR) by comparing the number of deaths in each datazone to the number that would have been expected based on the average rates for Scotland (by age group and sex).  The Scottish SMR for alcohol-related deaths or lung cancer and lung disease deaths is fixed at 100: datazones with SMRs higher than 100 can be said to have a higher rate than the Scottish average, and those with SMRs less than 100 have a lower rate.  For comparisons within a Local Authority area we have not re-standardised the ratios, but have given the Local Authority average SMR and indicated where the value for the selected datazone lies in relation to that average.

Deaths data for individual datazones, and the SMRs we have derived from these data, are considered sensitive data by law and cannot legally be distributed publicly.  Hence we have used bandings, as outlined in the table below:

Datazone deprivation on the map is given by the Scottish Index of Multiple Deprivation (2012).